Edinburgh Napier University in Scotland has reportedly instructed students studying to become midwives on delivering babies from “birthing persons” with a penis. This is just the latest case of lunacy promoted by the left, who claim that men can get pregnant. But this phenomenon of ‘men getting pregnant’ seems to have been prophesied in the Bible by Jeremiah.

The claim that men can get pregnant has infected western culture and has manifested itself in various aspects of technology and entertainment throughout America. Earlier this year, Apple released several new emoticons (emojis) as part of the iOS 15.4 update, one of them being that of a ‘pregnant man.’ Netflix is streaming a Japanese program called ‘He’s Expecting,’ which stars a ‘pregnant man.’ More recently, Clavin Klein’s Mother’s Day ad campaign pandered to the politically correct by featuring a pregnant transgender man (i.e., a biological woman).

Not just culture but also academia

The idea of ‘male pregnancy’ found its way into a recent article in Medical News Today that asked, “Can Men Become Pregnant?” began with the statement that “some transgender men and nonbinary people can [become pregnant].” The article investigated the possibility of uterine transplants that would permit biological men to give birth. It discussed the difference between sex and gender, described as a social construct.

“Unlike a person’s biological sex, which an individual’s reproductive organs and secondary sex characteristics define, genetics alone do not determine a person’s gender,” the article claimed.

A similar article in Healthline asked whether men could get pregnant and concluded, “Yes, it’s possible for men to become pregnant and give birth to children of their own. In fact, it’s probably a lot more common than you might think.”

Rabbi Yosef Berger, the rabbi of King David’s Tomb  on Mount Zion, described the transgender movement as the “last stage of idolatry that precedes the Messiah.”

“Idolatry is Man trying to replace God,” Rabbi Berger said. “Nature is one of God’s ways of manifesting in this world. God determines a person’s sex before he comes into the world. Rejecting this aspect of yourself is rejecting your relationship with God.”

“Just a few years ago, this was not discussed. Now, some people are trying to recreate reality in their own twisted image, rejecting God. This was envisioned by the prophets.”

The rabbi is referring to the Prophet Jeremiah:

Ask and see: Surely males do not bear young! Why then do I see every man With his hands on his loins Like a woman in labor? Why have all faces turned pale? Ah, that day is awesome; There is none like it! It is a time of trouble for Yaakov, But he shall be delivered from it. Jeremiah 30:6-7

“Surely the people who heard that prophecy first-hand thought it was absurd, that there was no possibility that such a thing would come to pass. But just as depravity and idolatry increased in Egypt, descending to the 49th level of impurity before the Redemption, so too this will happen in the end of days.”

Biden vs. The Bible

The transgender issue, affecting less than .6% of US adults, has become a platform the Biden administration is endorsing strongly. While on the campaign trail in October 2020, Biden promised to legalize transition treatment for children.

The idea that an eight-year-old child or a ten-year-old decides, “You know I wanna be transgender,” should be zero discrimination.

Biden made good on this promise by appointing Rachel Levine,  an openly transgender biological man, to be the assistant secretary for health. Levine, the father of two children, advocates for “transition treatments” for minors.

Last month, Biden made a speech for International Transgender Day, beginning with a statement that showed the depth of his faith and his belief in the Bible, claiming that transgenders were “made in the image of God.” This was, of course, a gross misrepresentation of the Biblical verse:

And Hashem created man in His image, in the image of Hashem, He created him; male and female, He created them. Genesis 1:27

Rabbi Moshe Avraham Halperin, head of the Machon Madii Technology Al Pi Halacha (the institute for technology according to Torah law), studies medical ethics in the framework of the Torah. He addressed the issue of transgender treatments on two levels: what is permitted by Jewish law and what this means in the larger context of society.

“This is certainly forbidden in Halacha (Torah law),” Rabbi Halperin said. “It is forbidden for several reasons, one being that it is explicitly forbidden to castrate a man.”

Rabbi Halperin cited Rabbi Abraham ben Meir Ibn Ezra, a medieval Spanish Bible commentator. The latter described a practice in his time in which men would cut their bodies to facilitate lying with men. Rabbi Halperin emphasized that this was forbidden in Leviticus according to the Ibn Ezra.

Do not lie with a male as one lies with a woman; it is an abhorrence. Leviticus 18:22

“This is just one of the symptoms of liberalism in the world. This is an effort to cancel out any expression of the Divine Will in the world and replace it with the individual as the Creator. This is the belief that people have the right to choose their gender.”

The rabbi emphasized that God decides gender, as stated in Genesis.

And Hashem created man in His image, in the image of Hashem, He created him; male and female, He created them. Genesis 1:27

“People who believe in God know that it is He who chooses how we come into the world and how we leave it,” Rabbi Halperin said. “God decides which seed fertilizes which egg and which gender it will be.”

“This is taking on political expression, and Biden is establishing precisely which side he is on without any pretense. This is expressed in every aspect of life, which is why liberal thought claims that people have the right to take a life whether through abortion or euthanasia.” 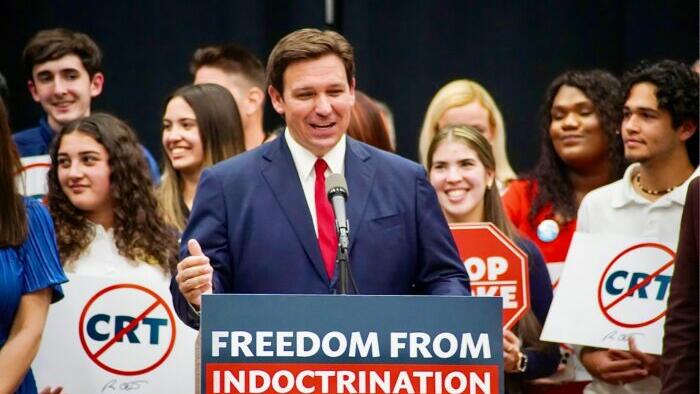