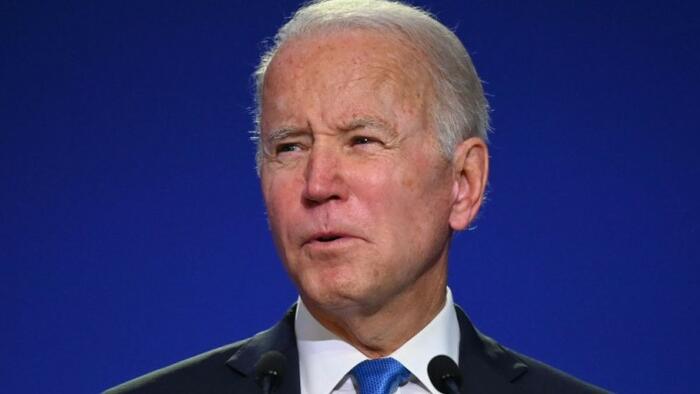 Having had the ‘Putin Price Hike’ narrative thoroughly dismissed by Fed Chair Powell earlier in the day, President Biden is set to keep repeating the ‘big lie’ until more people believe it.

“By suspending the 18-cent federal gas tax for the next 90 days, we can bring down the price of gas and bring families a bit of relief,” Biden said Wednesday at the White House.

Breaking down proposed tax savings, 18-cent savings per gallon of regular gas for 12 gallons (average fuel tank size for a US car) will save the consumer a whopping $2.16 every time they fill up.

Something that President Obama called “a gimmick” and Speaker Pelosi called “very showbiz”.

FLASHBACK: Barack Obama in 2008 slams proposed gas tax holiday: “This isn’t a real solution. It’s a political stunt. This is what Washington does whenever there’s a big problem. Politicians pretend they’re looking out for you but they’re just looking out for their poll numbers.” pic.twitter.com/QlyE5pKwX8

President Biden set to announce a suspension of the Federal gas tax for the summer.

President Biden explained “this is a time of war and global peril,” and that he reminded voters that he had always said there would be a price to pay for saving democracy in Ukraine.

Biden said that states, many of which are enjoying budget surpluses thanks in part to federal pandemic stimulus, should also suspend their own gas taxes, and he called on refiners and gasoline retailers to make sure “every penny” of the tax pause goes to consumers.

The president took another shot at ‘big oil’, claiming they should stop buying back their own shares and spend that money on refining capacity. There’s just one problem with that…

BIDEN: WANT OIL FIRMS TO USE PROFITS TO INCREASE REFINING CAPACITY INSTEAD OF BUYING BACK STOCK

Which is great… only oil firms don’t do buybacks, they pay dividends. If Biden wants to end buybacks, he should just go after his liberal tech friends pic.twitter.com/poR0glkBU3

Then Biden turned up the ‘blame-plifier’ to 11 by pointing the finer at gas station owners!!!

Biden: “To the companies running gas stations and setting those prices at the pump, this is a time of war, global peril, Ukraine. These are not normal times. Bring down the price you are charging at the pump. Do it now.” pic.twitter.com/DF9TEduoM5

Of course, the president didn’t take questions after his remarks, since that would mean explaining all the policy contradictions: he’s moved to curtail US oil production in the past before now urging its expansion, and cutting the price of gasoline may encourage higher consumption, countering his efforts to reduce US dependence on fossil fuels.

“Bottom line is this is just kind of another rhetorical tool of the White House to sort of show that they’re doing everything they can on inflation,” Libby Cantrill, head of public policy at Pacific Investment Management Co., said Wednesday on Bloomberg Television.

Ironically, Wholesale Gasoline prices are up today… as you’d expect from an inflationary policy…

Watch the president mumble through another failed narrative (due to start at 1400ET):

As Summit News’ Paul Joseph Watson detailed earlier, only 11 per cent of Americans believe the Biden administration’s narrative that Vladimir Putin is to blame for record high gas prices, with the majority blaming Biden’s poor energy policies instead.

A Rasmussen poll finds that 52 per cent of respondents think unaffordable gas prices are the fault of the president, with the vast majority rejecting the ‘Putin price hike’ excuse.

The survey also found that 80 per cent of Republicans blame Biden for the energy crisis, while 54 per cent of Independents also say responsibility lies with the occupant of the Oval Office.

29 per cent of respondents who didn’t blame Putin or Biden said greedy oil companies were the culprit.

Biden says #putinpricehike, but voters disagree. Who is to blame?

After the Biden administration’s attempt to blame the Russian leader failed to land, the White House has switched its rhetoric to start blaming oil companies, with Biden asserting the industry is “making more money than God.”

The poll reveals that Americans are also unimpressed with the media’s attempt to prop up the failing Biden economy, with just 11 per cent saying it has gotten better, with 57 per cent rating his economic performance as “poor.”

Biden loyalists have become increasingly absurd in trying to explain away gas price hikes and inflation, with former Treasury Secretary Larry Summers blaming people who downplay what happened on January 6.

“The banana Republicans who are saying that what happened on January 6th was nothing or OK are undermining the basic credibility of our country’s institutions and that in turn feeds through, uh, for inflation,” said Summers.

“The rise– whether you call it nationalism or the rise of this belief that we have to focus on communities that have been devastated by globalization, we need to find ways of creating better jobs for more Americans, that in itself is inflationary.”

As we highlighted earlier, more emergency services in the U.S. are having to limit the amount of 911 calls that they are responding to in person because of record high gas prices.

Brand new merch now available! Get it at https://www.pjwshop.com/

In the age of mass Silicon Valley censorship It is crucial that we stay in touch. I need you to sign up for my free newsletter here. Support my sponsor – Turbo Force – a supercharged boost of clean energy without the comedown. Get early access, exclusive content and behinds the scenes stuff by following me on Locals.