“The Bible Scientific” is my current blog series. Each post will examine a verse or two directly from Scripture and try to explain that Biblical quote from a scientific perspective.

It is often stated that the Bible and Science are not compatible, that the Bible is not a scientific text and that you can not believe the Bible and also believe science. I think this is short sighted as there are a number of places in Scripture where scientific facts were stated even before man understood them. The Bible is not a scientific text in that it is not meant to be the full explanation of scientific fact, but it does direct us to understand the nature of God scientifically as well as spiritually. It complements science. God uses His Word to help us understand Him and His creation with our mind, soul and spirit.

“The prohibition of science would be contrary to the Bible, which in hundreds of places teaches us how the greatness and the glory of God shine forth marvelously in all His works, and is to be read above all in the open book of the heavens.”

In this post we will look at Ecclesiastes and Isaiah where they discuss the Water Cycle.

Ecclesiastes 1:7 (NIV) – All streams flow into the sea, yet the sea is never full. To the place the streams come from, there they return again.
Isaiah 55:10 (NIV) – As the rain and the snow come down from heaven, and do not return to it without watering the earth and making it bud and flourish, so that it yields seed for the sower and bread for the eater.

These two verses suggest the flow of water from the sea to the sky to the rain, them back to the land and into the sea again. This is the fundamental principle of the Water Cycle or Hydrological Cycle. Without this process, life here would be impossible.

The water cycle describes how water evaporates from the surface of the earth and rises into the atmosphere, where it cools and condenses into rain or snow, forming clouds and eventually falling to the earth as precipitation. The falling water collects directly into the ocean or in rivers and lakes, the soil, and porous rock layers. From here it flows back into the ocean, and once again evaporates to complete the cycle.

There are many descriptions of the water cycle, with 4, 5, 7 or more steps in the cycle. Most start with some variation of these four main stages and expand each stage into more and more detailed components. All descriptions contain, in some form, these four steps of evaporation, condensation, precipitation and collection.

Let’s look at each of these stages:

Evaporation: The heat from the sun causes the liquid water in the oceans, lakes, streams, and soils to turn into water vapor (a gas) and rise into the atmosphere.

Condensation: As the air cools down, the water vapor turns back into liquid water and coalesces to make clouds.

Precipitation: The water in the clouds then form into droplets of rain, snow, hail or sleet (as a liquid or solid – water or ice) and falls from the clouds in the sky.

Collection: Some of the falling water (as a liquid or solid) collects in the oceans, rivers, lakes, and streams. Most will infiltrate (soak into) the ground and will collect as underground water, which eventually finds its way back to the ocean.

The water cycle is powered by the sun’s energy and by gravity. The sun kick starts the whole cycle by heating all the Earth’s water and making some of it evaporate. Gravity makes the moisture fall back to Earth.

He …who calls for the waters of the sea
and pours them out over the face of the land
— the LORD is his name. – Amos 5:8b (NIV) 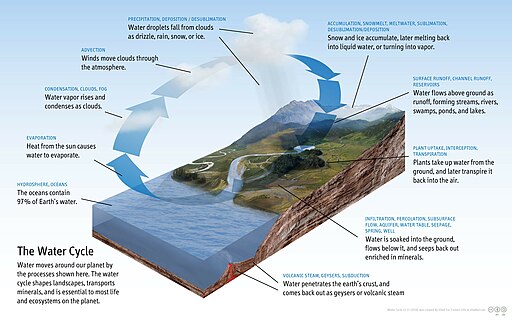 As you can see from this diagram, the cycle is much more complex than the simple description above of the four steps. In the first step, water rises into the atmosphere, leaving behind any accumulated minerals or other substances which can leave nutrients for plants and animals living on the land or in the sea. This also purifies the water so it can start the process clean.

As the water condenses into clouds, the clouds impact the weather in their location, possibly cooling the land or stirring up winds that will blow the clouds over the land from the ocean, further impacting the weather and affecting the type and chances of precipitation that may occur.

If the clouds move over higher elevations, the precipitation may come as snow which now covers the land with a very reflective surface which can reduce temperatures in the local area by reflecting back the sunlight. The snow and ice can also accumulate to form a water storehouse, later to melt and water the lowlands surrounding the snow pack. This collected water then extends the potential growing seasons for plant life and allowing life to flourish even when there is not continuous precipitation to provide regular waterings.

In the crucible of scientific investigation, the Bible has proven invariably to be correct. No other book, ancient or modern, can make this claim; but then, no other book has been written (through men) by God. From: Reasons to Believe.

I think as we learn more through scientific study and examination, if we are reasonable and open, we will see the hand of God at work.

Psalm 139: 13-16 – For you created my inmost being; you knit me together in my mother’s womb. 14 I praise you because I am fearfully and wonderfully made; your works are wonderful, I know that full well. 15 My frame was not hidden from you when I was made in the secret place, when I was woven together in the depths of the earth. 16 Your eyes saw my unformed body; all the days ordained for me were written in your book before one of them came to be.
Before It’s News® is a community of individuals who report on what’s going on around them, from all around the world.

The Peace of God 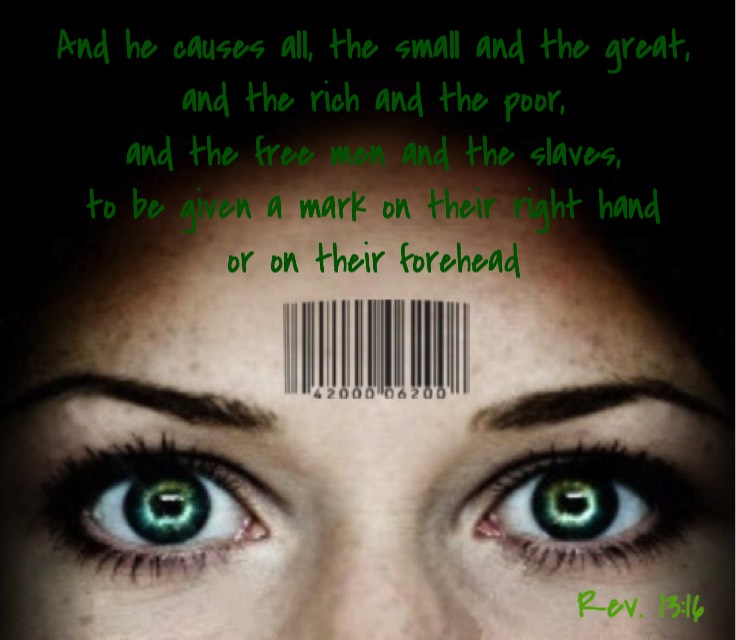 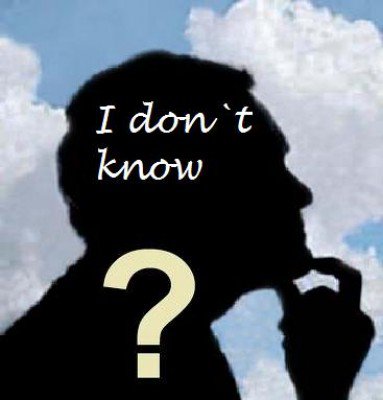 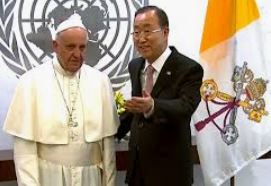